IMF’s conflicting views on sanctions, dollar reserves, and the dangers of Bitcoin 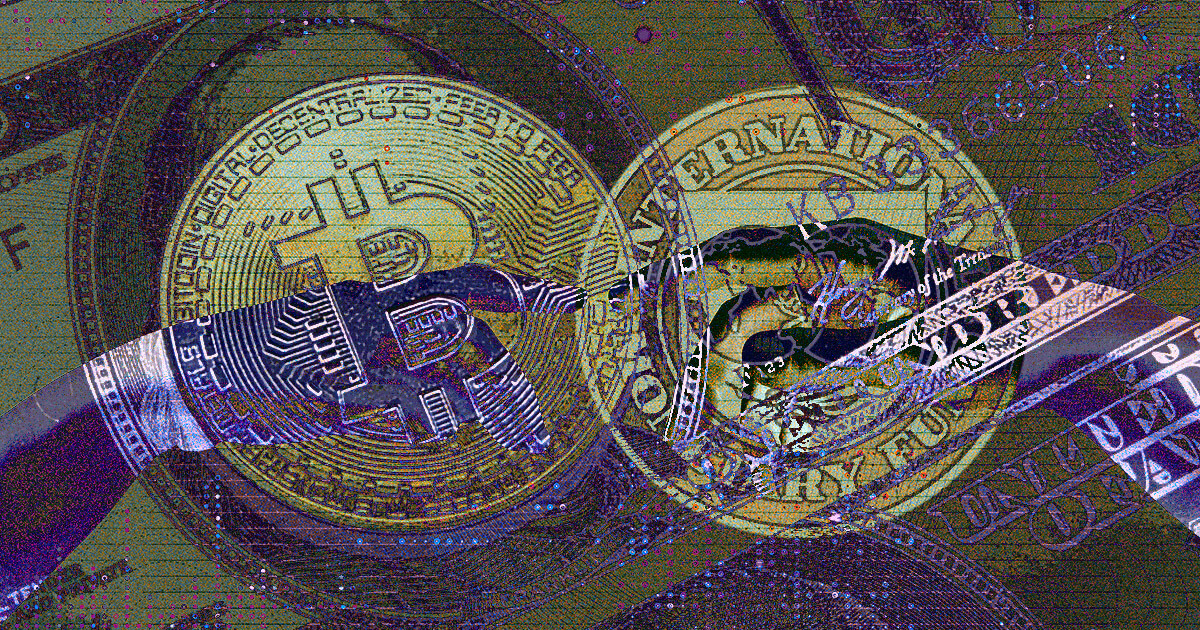 In an interview with Foreign Policy, IMF’s managing directors Kristalina Georgieva and Gita Gopinath shared their views on the impact Russia’s war on Ukraine has on the financial market.

The two women, holding the top two positions at the International Monetary Fund, agree that the impact can already be felt but it will take another few months before the global market experiences the full force of the consequences of war.

They confirmed the IMF’s support of the crippling economic sanctions the West imposed on Russia and said that they stand ready to help their members with more financing.

However, the IMF’s support for sanctions seems to be conflicted with its fear of the drastic changes to the dollar this might bring. And at the center of those fears stands Bitcoin with its ability to take more power away from institutions like the IMF.

With April on the way and the war in Ukraine threatening to enter its second month, the world is becoming increasingly worried about the consequences on the market. The International Monetary Fund, a global financial organization with 190 member states, is one of the most concerned institutions and has been continually warning about the impact prolonged conflict will have.

Their biggest worry, besides the effect on the outflow of goods from Ukraine, is that the war will cause a significant chunk of the globe to reconsider its dollar reserves.

When governed by free-market principles, the global financial system naturally turns to the U.S. dollar. Its stability, when combined with the scale of the U.S. economy and the U.S.’s dominance in the global oil trade, makes it a sound choice for a reserve currency.

However, when the majority of western economies confiscate reserves belonging to an independent central bank and cut off its access to the dollar economy, the currency becomes worthless as a reserve.

This is exactly what happened after the U.S. and the E.U. imposed crippling economic sanctions on Russia. Its dominance over gas and oil trade not just in Europe, but in the entire world as well, means that a huge number of countries face significant challenges when it comes to trading with Russia.

Gita Gopinath, IMF’s first deputy managing director, said that this will speed up the fragmentation of the global payment systems that have been going on for the past year or so. This is an important concern to the IMF, as it will effectively decrease the power international institutions like itself have over the global financial system and reduce the dollar’s dominance in global trade.

Gopinath explained that all currencies have two complementary purposes—storing value and facilitating payments. If countries begin changing which currencies they use for each purpose, it could lead to the creation of financial “pockets” that could have a detrimental effect on how the market functions.

And while she hasn’t explicitly named Bitcoin as the main culprit behind these tectonic changes to the market, she noted that the IMF was concerned about the increased use of cryptocurrencies they’ve seen.

Nonetheless, she still believes that the sanctions on Russia were well justified. The effect they had on Russia’s financial markets and the ruble are already dramatic, but the IMF won’t have a clear picture of its full scope until April, when it will publish its World Economic Outlook report.

A solution to Bitcoin—tightly regulated CBDCs

The IMF realizes it’s too late to nip the use of cryptocurrencies in the bud, so the institution has adopted a different approach—coming out with its own digital money.

Kristalina Georgieva, the managing director of the IMF, said that the board of directors of the IMF just approved the expansion of the work it’s been doing on the digitalization of money. In a recent survey, the IMF found that 100 out of its 190 members are at “some point” of investigating central bank digital currencies (CBDCs), pilot testing them, or already having them in place.

“The application of digital money is on steroids,” she said during the interview with Foreign Policy.

Gopinath also echoed this statement, saying that the war in Ukraine has only accelerated the use of CBDCs.

The IMF seems to welcome this push to digitalize national currencies, as it will be tasked with regulating them. It will also play a significant role in crafting laws that will regulate stablecoins, which it also sees as a positive development in the market.

Bitcoin, however, is anything but positive.

Georgieva said that the time has passed to have the regulatory framework around Bitcoin and similar cryptocurrencies “harmonized” around the world. The best thing the IMF can hope for is that the increased interest in Bitcoin will push more countries to tackle this issue individually, even if it leads to more regulatory fragmentation.

What does this mean for the crypto market?

Cryptocurrencies could see increased institutional adoption in both countries with pro-crypto regulation and countries that have been decreasing their dependence on the dollar. Mexico, Brazil, Chile, and Peru have all been diversifying their reserves from the dollar, with more Latin American countries expected to follow. Analysts fear that big economies like Saudi Arabia also might begin including large amounts of rubles and yuans in their reserves.

Russia’s openness to accept alternative forms of payments for gas and oil, which include Bitcoin, might also lead smaller countries with more flexible monetary policies to add Bitcoin to their own reserves.

The regulation the IMF believes is set to come could create uncertainty in the market. However, most market pullbacks we’ve historically seen as a result of upcoming regulations have been short-lived. While it might erase a small percentage of the overall crypto market cap in affected regions, we’ve seen the market get over these corrections faster than expected.

Easily-regulated cryptocurrencies, e.g. those issued by a centralized entity, will most likely be those hit the hardest when we see tougher regulation sweep through Europe and the U.S. Centralized exchanges and wallet providers could also suffer as stricter KYC and AML regulation is put in place, bringing the focus back to decentralized services and wallets.

The post IMF’s conflicting views on sanctions, dollar reserves, and the dangers of Bitcoin appeared first on CryptoSlate.