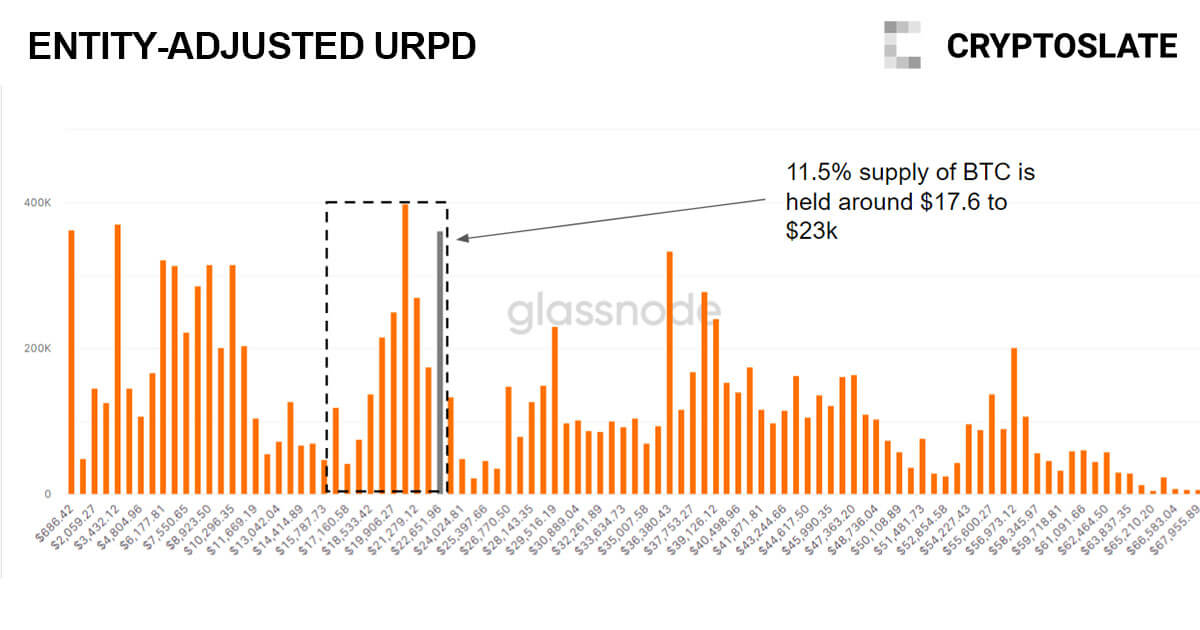 We can analyze some key graphs to understand the data better. UTXO Realized Price Distribution (URPD) shows at which prices the current set of Bitcoin UTXOs were created. Each bar indicates the number of existing bitcoins that last moved within that specified price bucket. The price specified on the x-axis refers to the lower bound of that bucket.

Following the 75% drawdown from the all-time high this year, 11.5% of the supply is currently held around the $17k price level. The increase in holdings between $17k and $24k may indicate a lot of demand has been swept up. Below $17.6k, all coins that have not moved must be defined as long-term holders, as Bitcoin has not dropped below this price since 2020. However, these investors can be considered mature long-term holders. The coins are lost or owners are unwilling to sell up to this point.

The following chart shows the type of cohorts buying at these price levels. The entity-adjusted version of the URPD Metric offers the supply segmented by Long-Term Holders (blue), Short-Term Holders (red), and Exchange balances (grey). All supply is shown in the price bucket at which the respective entity has (on average) acquired its coins.

Concerning Short Term Holders (holding BTC for less than 155 days), you can see the transfer of ownership from long to short-term holders around the $20k, from long-term holders capitulation sellers to HODLers or investors. They see value in these price ranges. 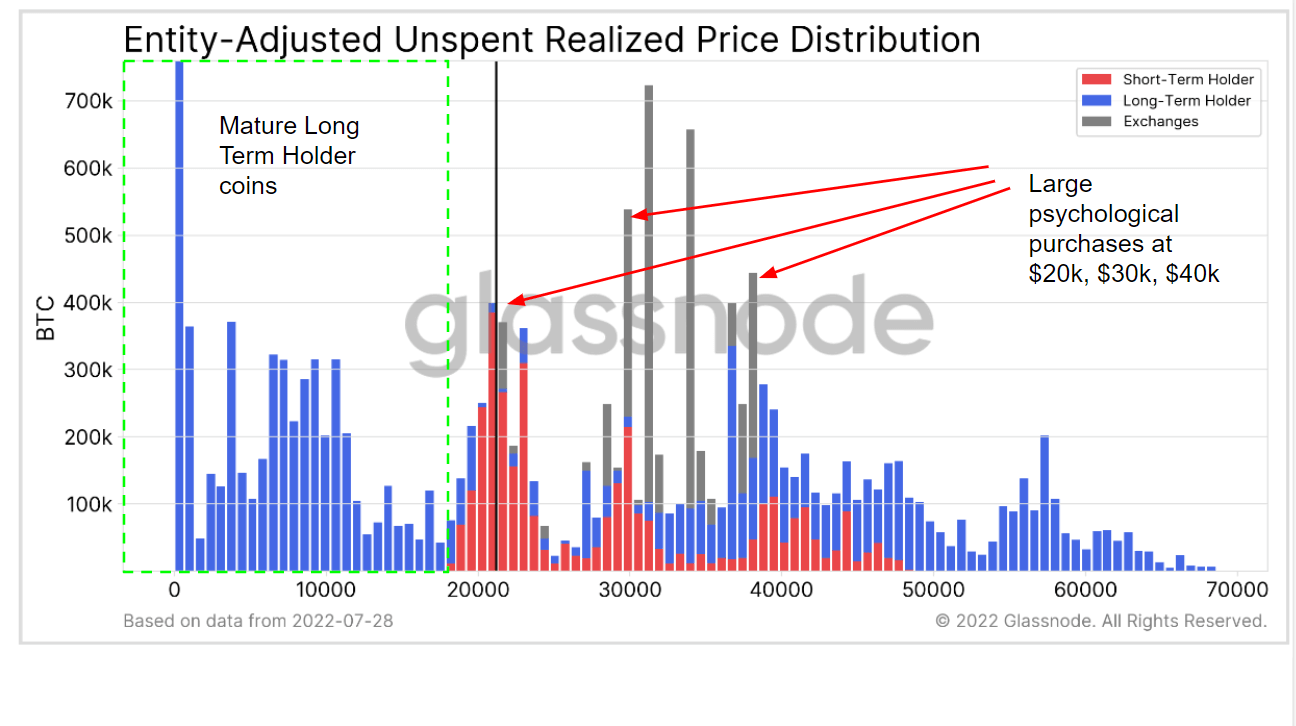 Shrimp cohorts with less than 1 Bitcoin have been stacking Sats relentlessly throughout the price ranges. Shrimps appear unfazed by price action and have purchased a significant amount of Bitcoin at current lower price levels compared to similar historical price ranges. The black vertical bar shows the market price at the chart production timestamp. 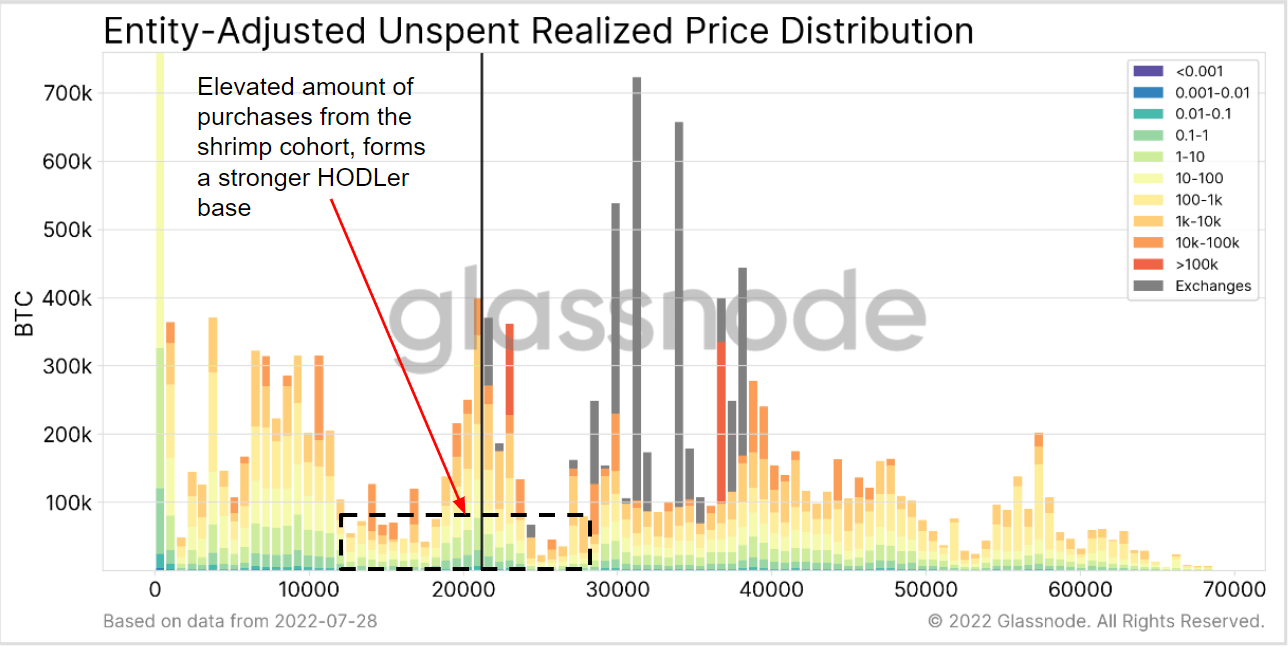 Interestingly, most exchange coins were bought between $30k and $49k with very little above, if any, above $40k. This information is crucial when assessing the liquidity of an exchange that holds Bitcoin on its balance sheet. At the current level of $23,800, exchanges are underwater by around 65% on the coins they have not sold.

There has been less buying by exchanges below $30k. However, around 350K BTC was purchased at the psychological level of $20k, totaling around $7 billion at the time of sale. Addresses with less than 10k Bitcoins primarily defended the level.

The following tweet by Prof. Chaine displays an animated version of the UDRP chart over time.

The post How short-term Bitcoin holders invest differently to long-term holders according to on-chain data appeared first on CryptoSlate.