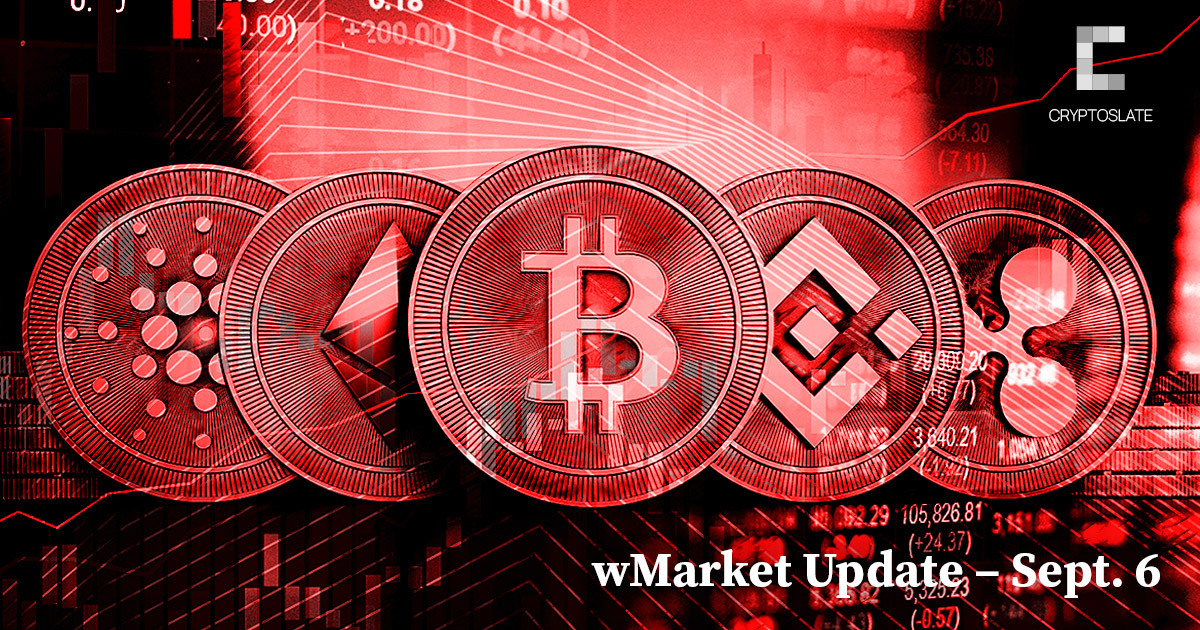 The top ten market cap cryptocurrencies were all red over the past 24 hours, with Cardano posting the highest losses after falling 9.26%, according to CryptoSlate data.

The price of the largest cryptocurrency continues to struggle and lose market share. Market sentiment remains mostly bearish, with the Bitcoin greed and fear index pointing towards extreme fear.

Ethereum (ETH) fell 8.65% and was trading at $1,51 as of 07:00 UTC after losing most of the gains made over the past week. Anticipation of the Bellatrix upgrade — the last significant upgrade before the Merge — boosted the price of ETH in the early hours of Sept 6. However, the technical issues after the upgrade went live caused bearish pressure on ETH’s price.

Despite the price falling 4.11% over the past week, ETH has been consistently performing better than Bitcoin over the last 30 days as the Merge comes closer. The Merge has also ballooned staked ETH to an all-time high of 14.26 million, valued at around $21.6 billion at current prices.

Although Voyager was the first lender to file for bankruptcy after Three Arrows Capital went bust, the firm is now evaluating bids for a buyout, the deadline for which was Sept 6. Voyager had previously rejected FTX’s proposal for buying out its loans and assets at market price, except its exposure to 3AC. Supporters of the token believe VGX could soon test $1, despite the company’s liquidity crisis.

BNX bagged the biggest gains for the day and was trading at $1.36, up 5.85% over the past 24 hours. The token’s price increased sharply at around 12:30 UTC on Sept 6, although the token has been trading downwards since. It is not currently known why the token’s price shot up.

HNT gained 2.05% over the past 24 hours and was trading at $3.88 as of publishing time. However, the token is down 30.36% over the past week. The community has been plagued with doubts since the developers proposed moving the project to Solana from its native blockchain late last month.

DFI saw the largest losses of the day, slumping by 23.22% over the past 24 hours to trade at $1.03 at the time of publishing. The token had experienced a sharp uptick on Sept 3, but the day’s losses eliminated all gains.

SSV dipped 16.98% over the past 24 hours, trading at around $14 at press time. The token, however, posted gains of 5.53% over the past week, and the current slump could to attributed to volatility.

SYN posted losses of 16.62% over the past 24 hours. The token was trading at $1.29 as of press time, after eliminating all its gains since Sept 5. The reason behind the volatility of the token is not known at present.

Following the slump in ETH price, LDO also suffered losses. It slipped by 16.55% over the past 24 hours, trading at $1.82 around press time. Over the past month, the token price has dropped by 21.66%.

Earlier this week, the price of ETC was pumping as ETH miners moved to the network ahead of the Merge, which will turn Ethereum into a proof-of-stake network.

Bitcoin price fails to hold $20K again, but there is a silver lining